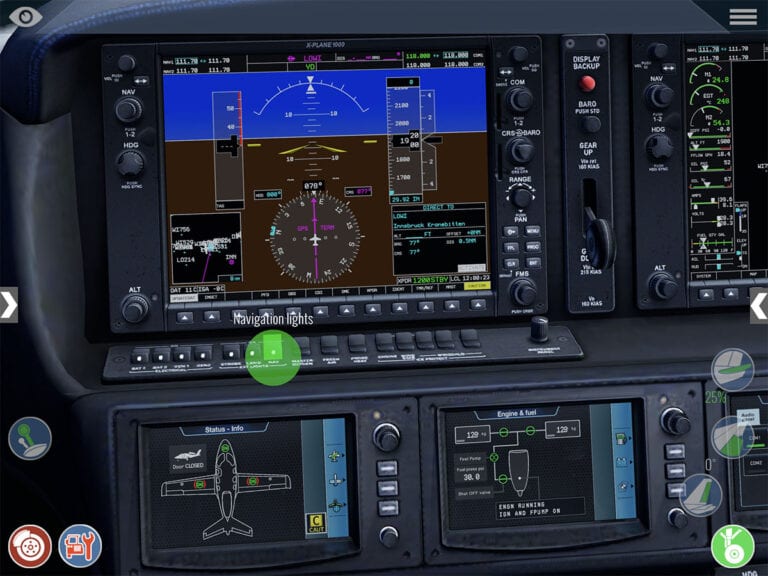 Mention “flight simulator” right now and most pilots will think of the new Microsoft Flight Simulator, which has been one of the hot topics in aviation since it was released last year. This is an impressive new option, and when paired to high quality flight controls, it’s a valuable resource for keeping current at home (but don’t try to learn crosswind landings on it). If you want the best flight simulator experience this is the way to go.

But not everyone has a Windows computer that’s powerful enough to run MSFS, and sometimes you only have time for a quick sim session. For those reasons—and many more—there is still a thriving market in iPad-based flight simulators. Lots of these have flashy videos in the App Store, but most of them are aimed at casual gamers, not pilots. Here are our top picks for flight simulators that work on the iPad and won’t make pilots roll their eyes.

X-Plane is a familiar name among pilots, as the company has offered a robust desktop simulator for many years. The mobile version has most of the features that have made the original one so popular, including realistic airplane models, stunning scenery, and intuitive controls. You can choose from a pre-loaded Challenge, or select Free Flight to choose your airplane, airport, and weather. The app includes a Cessna 172, Cirrus SF50 jet, Sikorsky S-76 helicopter, and F-22 Raptor by default. Additional airplanes cost between 99 cents and $4.99.

The level of detail in the cockpits is exceptional, with every switch and knob visible (and adjustable). The latest update includes an improved Cirrus Jet, with a surprisingly lifelike G1000 panel. You can push all the buttons, engage the autopilot, and tune the radios. This isn’t exactly like the real thing, but it’s pretty close. For example, when you tap on a light switch, the app will show you what it does. For basic glass cockpit proficiency, it’s a lot more than a game.

The other feature we really like is the option to adjust weather and fail systems. The bottom of every Free Flight launch page includes options for airplane, location, weather, time, and failures. This makes it fast and easy to set the flaps to fail or leave the fuel cap off. You can even set these to “could fail” to add some surprise factor.

X-Plane is free to download, and while it really flies on newer iPad Pro models, it will run on any device with iOS 13 or newer. The free version doesn’t have as many limitations as you might expect: it’s a solid simulator right from the start. In addition to buying additional airplanes, you can subscribe to global scenery for $49.99/year. This adds global scenery, more than 11,500 highly detailed airports, and unlimited access to all aircraft.

Infinite Flight is our second recommendation, and it offers a similarly polished experience with plenty of customization options and a vibrant community. It’s a little more airline-focused (standard airplanes include three Boeings, two Airbus models, and a CRJ-200), but the app includes a Cessna 172, Cirrus SR22, and a CubCrafters XCub.

There are the usual options for choosing an airplane and a location, then you’re ready to fly. The cockpits and scenery are both highly detailed, with the option to fly a heads-up display, a cockpit view, or a variety of exterior camera angles. Like X-Plane, simple buttons on the side of the screen make it easy to adjust throttle or flaps, and the pitch/roll control is your iPad’s built-in accelerometer.

One small feature we like is the option to quickly move the airplane to takeoff or short final position. In the screenshot below, we instantly set up for landing on short final, and the red boxes provide guidance for a smooth landing.

Another helpful feature in Infinite Flight is accessed by tapping the globe at the bottom left corner of the screen during a flight. This brings up a map overlay (Wittman Airport in Oshkosh below), which is helpful during cross-countries or instrument flights.

Infinite Flight is only 99 cents to download, and this gives you access to plenty of options, including 12 airplanes and beautiful visuals, although the geographic areas you can fly in are limited to only a handful of options (including California and the Chicago/Oshkosh area). To unlock all the locations, including live weather, a multiplayer environment, dozens more airplanes, and live air traffic control, you’ll want to spend $79.99 on a Pro subscription. The live ATC feature in particular, where other users act as controllers (after some training), is a fun way to practice your aviation skills.

Both X-Plane and Infinite Flight are mature apps—these don’t suffer the same annoying bugs and frustrating menus you’ll find on more homemade options. But as good as they are, any simulator made for iPad is a poor substitute for real flying. They are all but worthless for learning maneuvers, landings, or seat of the pants flying skills. However, they have value for basic cockpit awareness (where is the trim wheel in a 172?) and instrument scan (if anything, this is harder in the app because pitch is so sensitive). It’s also worth pointing out that both apps work with ForeFlight, making either one a great way to practice EFB procedures from the comfort of your home. Oh yeah, they’re also a lot of fun…

The post The best flight simulator apps for iPad (if you’re a pilot) appeared first on iPad Pilot News.