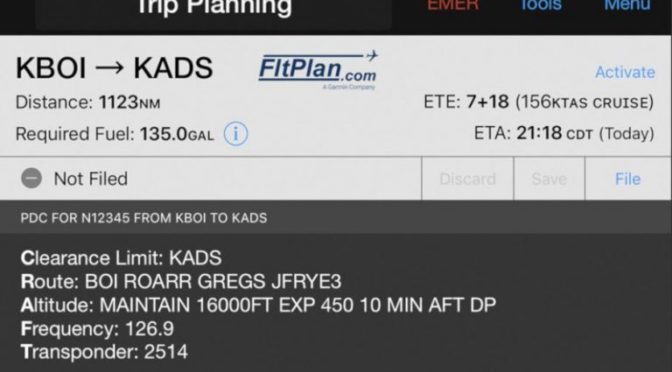 Over the last 10 months, Garmin has made large strides in integrating FltPlan.com functionality into its flagship Pilot app after purchasing the company last Fall. Earlier this year they tackled the number one requested feature by allowing pilots to create, file, amend and cancel flight plans using FltPlan.com’s services right from the Garmin Pilot Trip Planning screen.

The next big update just hit the app store this week as part of Garmin’s new product introductions at Oshkosh, and this one is focused on bringing FltPlan’s premium features to the app. This includes Pre-Departure IFR Clearances (PDC), Electronic Advanced Passenger Information System (U.S. Customs eAPIS) and Optimized Routing functionality.

The Pre-Departure Clearance (PDC) system automatically delivers, via text and email, departure clearance information at over 70 of the busiest airports in North America, simplifying operations and reducing frequency congestion. PDCs are official text clearances issued for US IFR flight plans and include the filed route, the cleared altitude, transponder code, departure frequency, and any special instructions. A PDC replaces (and is the same as) receiving a verbal clearance from Clearance Delivery.

Pilots flying with Garmin Pilot and the FltPlan.com PDC service can now access this clearance information right in the app. It will appear approximately 20 – 30 minutes before the scheduled departure time in the following locations:

1. At the top of the Trip Planning page for the flight

2. In the FltPlan.com split-screen view on the Map Page

3. As a notification on the home screen of your iPad

All pilots flying across the U.S. border in either direction are required to file a report using eAPIS, which stands for Electronic Advance Passenger Information System, to notify U.S. Customs and Border Patrol (CBP) of the name and details of each person entering or leaving the country. eApis requires the pilot to send a manifest to CBP at least 60 minutes prior to departure.

The conventional way to file this report is through the CBP eAPIS website, but the site is not the most user-friendly. Pilots also have the option to use a third-party service, like the one offered through FltPlan.com, to file these manifests. In the latest update Garmin Pilot allows you to enter and upload passenger and crew manifests to Customs right from the app using your FltPlan.com eAPIS subscription.

Unlike the free flight plan filign service from FltPlan.com, PDC and eAPIS are premium features that require an annual fee. You can learn more about these services here:

Pilots can take advantage of FltPlan.com’s Preferred and Optimized Routes when planning a flight. This will display previously-cleared ATC routes along with the time en route and fuel burn for each proposed route based on the flight details. The routing will be sorted by shortest time en route and fuel burn, and show how many time the route has been issued to other pilots by ATC.

When entering flight data in the Trip Planning section of the app, press the View Routes button to see the options, and tap one to add it to your flight plan.

What else is new in Garmin Pilot 9.7 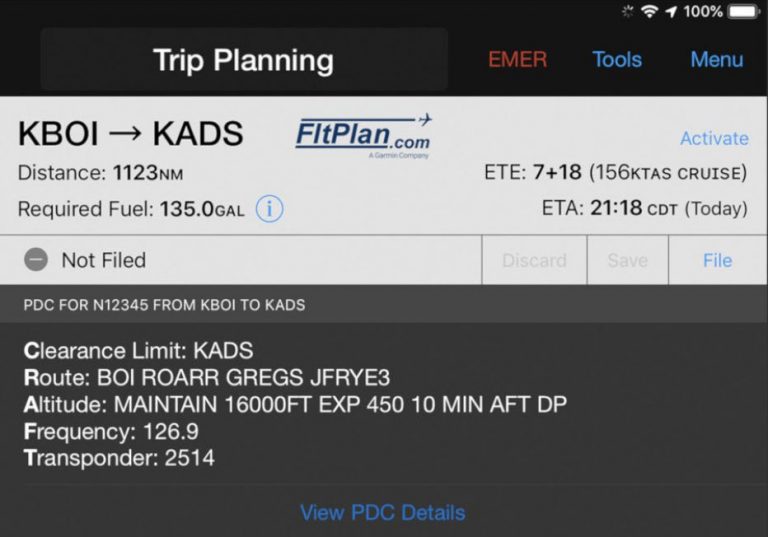