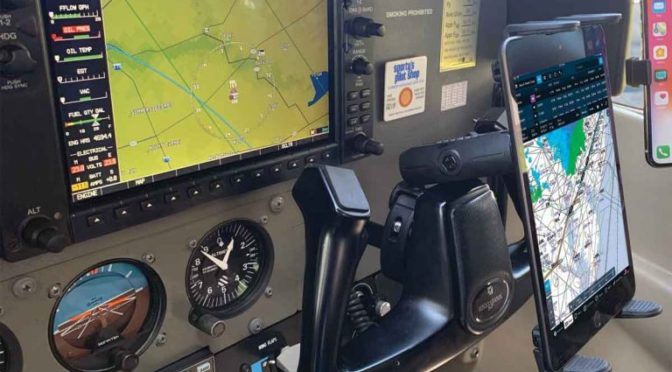 Securing your iPad while you fly is important for safety (to prevent your tablet from flying around the cockpit), but also for convenience (to keep it close by and easy to use). There are plenty of different mounts to choose from, but they aren’t all universal. Which one is right for you? It depends a lot on the type of airplane you fly. Let’s look at some examples.

Almost any mount will work in these popular airplanes, but our two favorites are the suction cup and the yoke mount.

The suction cup is easy to put up and remove, making it a good choice for renters. It keeps the iPad off the yoke, so it doesn’t block any instruments, but it’s still easily viewed. We like the side window, angled toward the pilot, especially for larger iPads (where the yoke may not work). Another option is to use the front windshield on the right side – if there is no co-pilot – so that it integrates into your avionics stack.

The yoke mount is also very popular, since it holds the iPad very securely right in your line of sight. This works best for the iPad Mini, but the full size iPad Air and Pro models are small enough to work well also. Most yoke mounts now use an improved claw design, which is easier to install and does a better job keeping the iPad in place on the yoke shaft. One other tip: you can mount the iPad on the co-pilot yoke to keep the primary instruments completely unobstructed.

If you want to mount your iPad with one of these options, but don’t want to remove your case each time, consider the Robust series mounts instead of the form-fitting RAM cradle. This provides the flexibility to secure your iPad with the case on while still using a yoke or suction mount.

With the side stick, one popular option is out the window for these airplanes (the yoke mount), but there are still some good choices. Again, the suction cup mount works well here, but be careful about where you mount it in the side window – the iPad can interfere with the side stick in some configurations.

For this reason, some pilots choose an iPad kneeboard instead, and with plenty of room in your lap this is a good setup. One final option we’ve seen work in some of these airplanes is to use the yoke mount, but attach it to a bar underneath the panel. Here, the iPad can be angled out towards the pilot, with the arm coming out from the bottom. This is convenient when installed on the co-pilot side, but we would be nervous about this in front of the pilot due to emergency egress issues.

Like high-wing Cessnas, the suction cup mount and the yoke mount are two good options here. One thing to keep in mind for these airplanes is that kneeboards may not work very well. Oftentimes the yoke is very close to the pilot’s legs in these cockpits, so the yoke might hit a kneeboard on takeoff or landing.

There aren’t many great options for these airplanes, since the yoke design varies dramatically between models. The kneeboard option is our preferred choice, since it stays out of the way of floor-mounted yokes. The other mount we’ve had success with is the double suction cup mount from RAM. This holds firmly to the side window, and most jets have enough cockpit space to accommodate this mount without interfering with the instruments or the controls. This is the approach many airlines use.

The mounts above include options from RAM, Robust, and MyGoFlight. Another option is the PIVOT case and mounting system. This hard-sided case was developed by a Southwest Airlines pilot and offers serious protection. The complete system includes a quick-release suction cup mount that is ideal for the side window. Alternately, pilots can use the universal 1″ ball adapter to use the PIVOT with RAM Mounts.

In addition to the Beech mounts, MyGoFlight also offers a complete line of iPad mounts, including a suction cup and a yoke mount. These have multi-piece arms with multiple joints, so they are almost infinitely adjustable. This makes it easy to position your iPad more precisely, either on a side window or on the yoke. The mounts cost a lot more than a typical RAM or Robust system, but they are well made and offer a lot of flexibility.

If iPad overheating is an issue in the cockpit, there are also mounts available with built-in cooling fans from X-Naut. This system circulates cool air at around your iPad to ensure reliable operation in hot conditions. These work with all standard RAM Mount systems, and have built-in batteries to remain wire-free.

Finally, for experimental airplanes there is perhaps the ultimate mount – one built into the panel. The best option right now comes from Guardian Avionics, with their iFDR Panel Mount. This mounts flush against the panel and has cutouts for power and a cooling fan.

As you can see, the options are vast and sometimes confusing, but there is a setup that works in virtually any airplane. You can shop the complete iPad mount collection here. Or, check out a variety of iPad kneeboards here.

Want to see different size iPads mounted in a Cessna 172? Read this article.

Not sure which iPad model you have? Read this article.

The post How do I mount my iPad in the airplane? appeared first on iPad Pilot News.

Source: Ipad appsHow do I mount my iPad in the airplane? 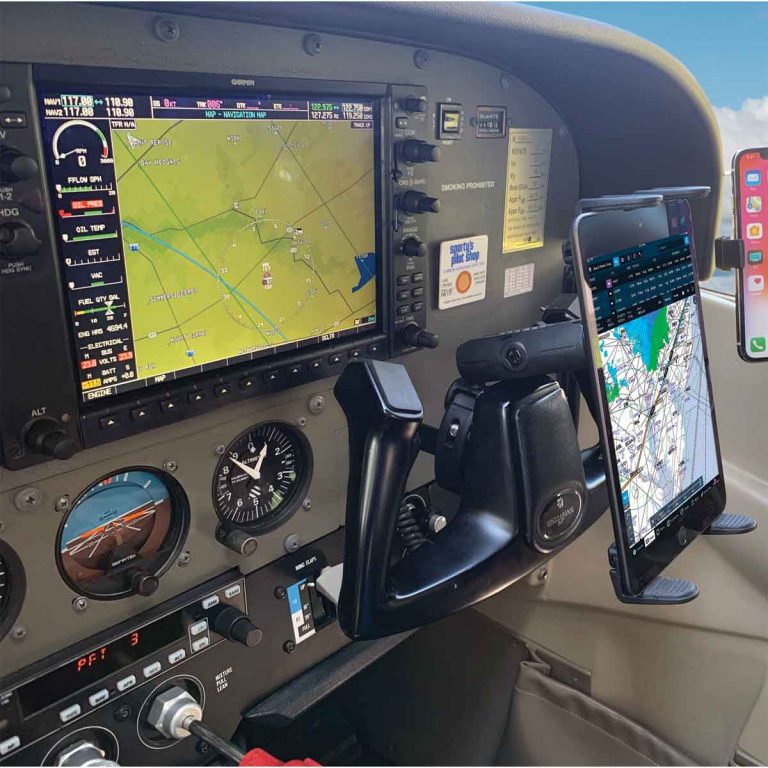