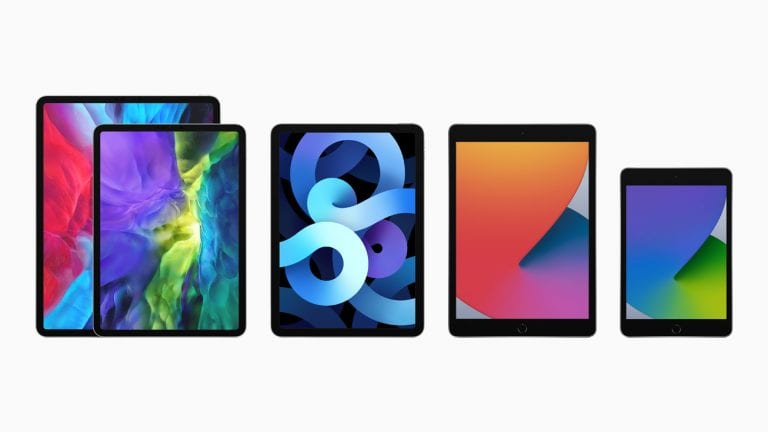 It’s that time of year again when Apple lifts the curtain on its latest and greatest iteration of the mobile computing iPad lineup. True to form, the new iPads announced today are the “best yet,” but practically speaking provide pilots with only minor improvements over previous versions of the inimitable tablet that has found a permanent home in the cockpit.

It was only six months ago that Apple unveiled the newest in their Pro line of iPads and today’s announcement rounds off the lineup with a refresh to the remaining entry-level 8th generation iPad and the iPad Air 4. Some features to the newest Apple Watch were also to be had that may be of interest to pilots.

The iPad 8 remains largely unchanged from the previous model—including the size—which means cases and kneeboards for the iPad 7 will be compatible with this version. This new entry-level iPad does gain a new A12 processor, giving it a modest bump in performance. This will help continue to support the ever-increasingly intensive navigation apps like ForeFlight and Garmin Pilot. While that iPad 8 may not be a powerhouse in the cockpit, its 10.2″ display and foot-in-the-door price of $329 makes it a great option for any pilot looking to get their feet wet using a tablet in the cockpit.

While the iPad 8 update may be a bit lackluster, the new iPad Air receives a little more attention. The new iPad Air 4 is virtually identical in size to the iPad Pro 11 which means a larger selection of kneeboards and mounts are immediately available. The Air 4 gets a larger, 10.9″ edge-to-edge retina display too. This larger screen required the removal of a traditional home button with Touch ID. In lieu of faceID, as with the iPad Pro, the fingerprint sensor was moved to the edge button.

This physical Touch ID may be a welcome feature to pilots who find it difficult to make eye contact with their device while flying, especially when wearing headsets and sunglasses. The larger screen also includes the non-reflective coating, which we’ve come to appreciate especially in low wing aircraft that tend to get more direct sunlight.

While the outside is much the same, the inside gets some improved guts. An all-new A14 Bionic processor, loaded with a six-core CPU, promises to be 40% faster than the previous iPad Air. And ForeFlight maps should draw ultra-snappy now with improved graphics support thanks to a new four-core GPU.

Additional changes that make the Air look a lot more like the Pro include USB-C charging capable of up to 20 watts. It also now sports the same 12-megapixel rear-facing camera from the Pro as well as support for the second generation Apple Pencil and Magic Keyboard. Given that the feature set of this new iPad Air so closely matches that of the iPad Pro,  the steep price tag of $599 is a little easier to swallow. It also makes us wonder if Apple is setting up to drop a new iPad Pro in the near future. If you’ve had an eye on an iPad Pro but don’t want to spend the cash, the new Air 4 is probably a good deal.

As pilots, we love a good watch as much as the next, and we’ve enjoyed seeing the Apple Watch evolve into a potential tool for the cockpit. Check out our list of some of the best apps out there compatible with the Apple Watch, including Sporty’s popular E6B watch app.

The newest Apple Watch now includes a blood oxygen sensor that will alert the wearer in the event of hypoxia. This is an obvious benefit to pilots, especially in the flight levels, but also for anyone flying above 5,000 feet at night. Standalone battery-powered pulse oximeters have become a staple of every cockpit, but the problem is remembering to use it before its too late. Now, with the Apple Watch Series 6, your blood oxygen concentration can be monitored automatically and constantly, sending a series of notifications to alert you of dangerously low levels of oxygen. Apple says the Series 6 can measure blood oxygen levels in about 15 seconds, using both red and infrared light. It’s a very powerful safety enhancement.

The new Apple Watch also features an always-on display that is 2.5 times brighter than the previous watch, making it even easier to see important details at a glance even when it may not be convenient to let go of the control yoke. Additionally, the built-in altimeter is now “always-on” and is accurate up to one foot. This has the potential to drive more accurate and timely altitude information for navigation apps like ForeFlight, which can warn of a potential terrain and obstacle hazards.

Both new iPads will come pre-installed with the newest revision of the mobile operating system enhanced especially for the iPad. One of the most touted features of iPadOS 14 and probably the most relevant to pilots is “Scribble.” Scribble essentially recognizes handwriting and converts that to plain text. This allows Apple Pencil users to use handwriting just about anywhere you’d normally type, even directly into text input fields. This could certainly be handy when jotting down a clearance. We’ll have more thorough coverage on iPadOS 14 and iOS 14 in a later post.

These iPad 8 and Apple Watch 6 are available to order starting today on apple.com and will be in stores beginning Friday, September 18. The iPad Air 4 won’t be available until some point in October.

The post New iPads Are An Incremental Improvement For Pilots appeared first on iPad Pilot News.

Source: Ipad appsNew iPads Are An Incremental Improvement For Pilots