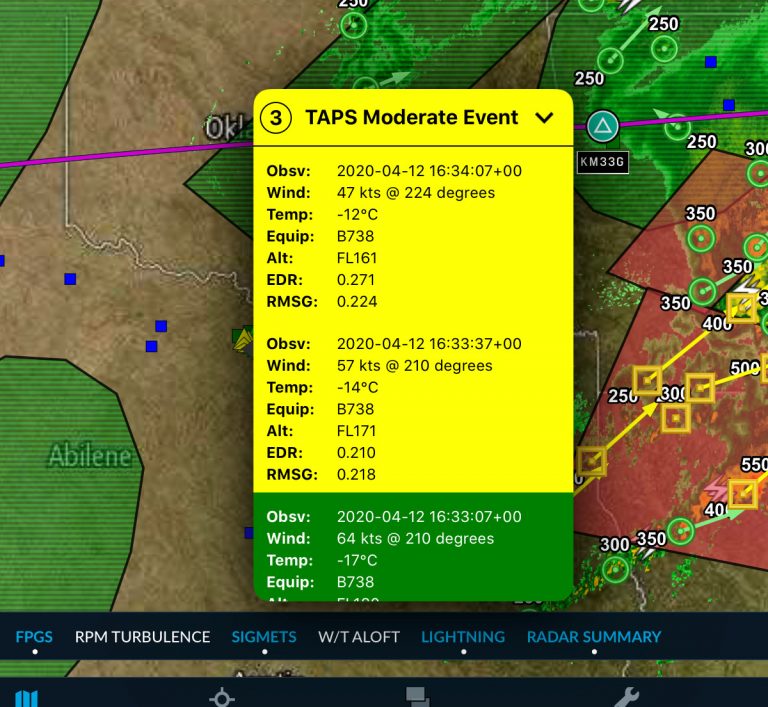 An interesting thing happened shortly after the iPad’s debut in 2010. As aviation EFB apps and portable ADS-B receives exploded in the GA market, the private pilot flying in a Bonanza or Cessna 182 gained a leg up on their pro pilot counterparts flying Boeing and Airbus airplanes.

While airline pilots were busy shuffling Jepp paper charts in leather binders, we were enjoying digital geo-referenced approach charts and airport diagrams, free datalink text and graphical weather and all the benefits that come with a paperless cockpit. Of course, it didn’t take long for the commercial industry to catch up and today just about all the major U.S. airlines depend on the iPad for digital chart and document management.

Many airline pilots also now have access to datalink weather, but they’re not using ADS-B like we’re accustomed to. Instead they are using the WSI Pilotbrief app, which uses the airplane’s inflight internet connectivity as the data source (e.g. Gogo). This displays all the pertinent datalink weather products like radar imagery, METARs, TAFs, PIREPs, SIGMETs and more.

But there’s another component to this system that will make GA pilots envious – automated turbulence reporting. Developed by AeroTech Research, Inc. in partnership with WSI, The Turbulence Auto-PIREP System (TAPS) uses vertical accelerometers installed on certain Boeing and Airbus airplanes to continuously monitor in-flight g-loads. When turbulence is detected above a certain threshold, the data is sent back to WSI on the ground, processed, and then sent back to the WSI Pilotbrief app.

Turbulence “events” are depicted as a user-selectable overlay on the moving map in the WSI app, similar to how ForeFlight displays ADS-B PIREPs on the moving map. The reports also include other important weather data points captured by the airplane’s sensors, including altitude, winds aloft and temperature.

TAPS reporting has been installed on over 650 aircraft (B-737-800, B-757-200, B-767-300ER, B-767-400ER, A320 and A330) and has been well-received by airline pilots. In addition to helping pilots choose the best routes and altitudes for a smooth ride, the system also saves the airlines money by reducing unnecessary airframe inspections due to turbulence encounters.

It doesn’t take long to start dreaming up ways of how we could take advantage of crowd-sourced weather data like this in the GA world. Our number-one requested feature would be the ability to submit PIREPs in flight right from the aviation iPad apps (Stratus Insight offers this capability now). And it wouldn’t take long for Garmin, Appareo or uAvionix to develop affordable sensors to capture real-time turbulence metrics and other inflight data, which could then be shared with other pilots flying nearby.

The reality though is that none of this works until there is an affordable inflight internet solution for small airplanes. Until then, we’ll have to be content with the free one-way ADS-B weather data stream, and appreciate the technology the pilot at the front of your next airline flight is using to make sure the ride is as comfortable as possible.

The post How airline pilots are using crowd-sourced in-flight weather on their iPad appeared first on iPad Pilot News.