The FAA has published special air traffic procedures that will be in effect April 1 through 9 in connection with the Masters golf tournament in Augusta, Georgia.

Garmin announced the addition of numerous Beechcraft and Piper single-engine airplane models to the list of aircraft approved to use the GFC 500 autopilot and plans a Southeast and Midwest demonstration tour of a GFC 500-equipped Cessna 172 in April. 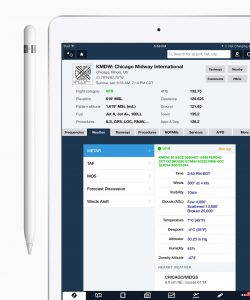 During a primarily education-focused event in Chicago earlier this week, Apple announced the release of their newest tablet. During the event, CEO Tim Cook and his executive team detailed Apple’s “creative new ideas for teachers and students.” Unfortunately there was no specific mention of ideas for pilots and flight instructors.

Beyond the educational focus of the event, an updated iPad based on the lowest end iPad in Apple’s line-up was revealed for the price of $329. That’s the same price as the previous version. You can order the new iPad now and inventory is now showing up in Apple retail locations and at Best Buy.

This new 9.7″ iPad shares the same body as previous version and is available in silver, space gray and a new, gold finish. It also sports Apple’s new A10 Fusion chip with a claimed 40% faster processor for graphics performance.

The biggest feature addition is compatibility with Apple’s Pencil which previously was only available on the “Pro” line of iPad tablets. The Apple pencil is a $100 accessory that we have found very useful for writing down clearances, and making annotations on approach charts and taxi diagrams in the Plates section of the app.

No word on a refreshed or updated version of the iPad many. Speculation suggests that Apple may no longer develop the smaller iPad especially with the success of their larger plus size iPhone.

Pilots currently considering purchasing an iPad for flying may appreciate the lower entry price of this new iPad combined with the Pencil capability. If you already use an iPad in the cockpit and are happy with it, we believe at this time it’s not necessary to consider this latest device.

If you’re seriously shopping for a cockpit tablet, we still think the iPad Pro may be a better value for most pilots. While nearly twice the price, device already supports the Pencil, has twice the storage capacity and the screen size is 20% larger. Additionally the iPad Pro screen has a custom-designed anti-reflective coating reflects just 1.8% of light. The Pro also includes the ProMotion 120Hz refresh rate display. One of the biggest hurdles for pilots flying with the iPad is screen readability especially in direct sunlight and we believe the iPad Pro improves that experience exponentially.

The post The New iPad is Basically the Old iPad appeared first on iPad Pilot News.

A night dual-instructional cross-country flight can be highly educational. That goes double when the flight instructor gets an unexpected lesson on the consequences of cutting safety margins too close.

Rob Holland, the most accomplished aerobatic competitor and showman of his generation, had his hands full on March 25 after a catastrophic engine failure covered his canopy with oil, and forced a landing that he walked away from, though his MXS-RH was badly damaged.

The FAA has issued an airworthiness directive (AD) affecting several of Textron Aviation’s Beechcraft Bonanza models, limiting the life of an exhaust-pipe v-band coupling and requiring repetitive inspections of the part.

Siemens, the diversified German firm with projects in agriculture, automotive, food, healthcare, smartphone technology, propulsion systems, and more, showcased the firm’s all-electric eAircraft for the first time in the United States March 27. The two-person airplane is powered by a 60-pound, 55kW, 74-horsepower, direct-drive electric SP55D motor that was highlighted during an Innovation Day demonstration in Chicago. 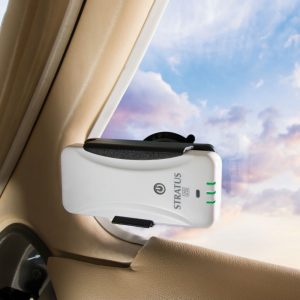 ADS-B receivers continue to be the most popular iPad accessory on the market. These all-in-one devices stream GPS, subscription-free weather, traffic and optional backup attitude information to your iPad, changing it from a static chart viewer to an interactive in-flight tool. Some even include SiriusXM weather and entertainment features.

They are also the source of a common question we get at iPad Pilot News: “which ADS-B receiver should I buy?” With all the options (over a dozen at last count), it’s easy to get confused. Here, we’ll try to offer a practical guide to choosing the right ADS-B receiver. We will focus on the most popular models.

One important note here – these ADS-B IN receivers are portable, non-certified units designed solely for the purpose of providing in-flight data to iPads, iPhones and other portable displays in the cockpit. They do not provide ADS-B OUT data and will not help you to meet the 2020 ADS-B mandate.

The first tip is easy: choose the app you prefer first, then choose an ADS-B receiver that works with that app. Some pilots get this backwards, chasing hardware around and switching between apps. That just leads to confusion and frustration.

As a pilot, you have to live with your aviation app on every flight (and in between them) whether you use an ADS-B receiver or not. Make sure your app is one you understand and feel comfortable using. Whether it’s ForeFlight, Garmin Pilot, WingX, FlyQ or something else doesn’t matter–the right app is the one that works for you and your flying. Try them all (they offer free trials so you can couch fly them) and become truly proficient with the one you select. After picking your app, then it’s easier to choose the right ADS-B option. Because of the deep integration required between app and accessory, many ADS-B receivers are app-specific:

Don’t misunderstand us: there are differences between the various ADS-B receivers. But these differences pale in comparison to the apps. You have to start here.

If you fly with a Garmin 796, 696, aera 660 or aera 500 series GPS, there is an additional consideration. The GDL 50 and 52 can both feed information to a portable GPS, in addition to your iPad. This is a nice way to get extra utility out of an older GPS or to have a full-featured backup navigator in the cockpit.

For the 796 and aera 660, this connection is wireless via Bluetooth. For the other models, it requires an adapter cable. Also note the Garmin 796/795 and aera 660 allow you to display full pitch and roll information from the GDL 50/52’s built-in Attitude Heading Reference System (AHRS). This makes these truly no-compromise display units for the GDLs.

If you don’t have one of these devices, this feature won’t matter. If you have a Garmin GPS but you use another app, is it worth switching to take advantage of this? Only you can answer that question, but ask yourself which device would be primary: iPad or Garmin?

Once you’ve settled on an app and considered the Garmin option, it’s time to choose a specific ADS-B receiver. This is where it makes sense to compare specs, but it’s worth noting that every receiver on the market offers the two key features: GPS and subscription-free weather. These are the things you’ll use most often, and almost every unit includes them. That means there isn’t really a bad option.

Beyond these basics, there are three other features to consider: traffic, attitude and SiriusXM. While all portable ADS-B receivers are limited in terms of how much traffic they display (see this article to learn why), dual band ADS-B receivers generally pick up more traffic. So if traffic is an important feature, consider a dual band receiver. One more note on traffic: if you’ve already equipped with ADS-B Out in your panel, single band is all you need.

Another feature to consider is built-in AHRS to deliver backup attitude information or synthetic vision to your iPad. This is not even close to a primary instrument, but in a worst case scenario, we would not hesitate to use it. For a VFR pilot, it may be overkill and you can save a lot of money by choosing a non-AHRS model, but we still think there’s value in it for situational awareness. For an IFR pilot, it’s a great insurance policy.

There are also some additional features beyond the basic ADS-B/weather/GPS/traffic/attitude set. Some models, like the Stratus 2S, include automatic flight data recorders so you can store your flights and replay them in apps like CloudAhoy or Google Earth. The Garmin GDL 52, on the other hand, includes a SiriusXM weather receiver for expanded signal coverage in and around the U.S. This also delivers additional weather features and satellite radio entertainment.

Finally, while most pilots spend a lot of time debating single vs. dual band or AHRS vs. no AHRS, we think too little time is spent on “softer” features. These include ease of use, reliability and customer support. Such features aren’t easily compared in a chart, but they impact your flying in a significant way. Consider how well-integrated the receiver is with the app, how easy to use the entire system is and what customers are saying about support. You can learn a lot reading customer reviews online.

One feature that doesn’t matter much is reception. Every ADS-B receiver we’ve flown with has perfectly good reception for normal operations, and with the ADS-B network now complete, this is less of a problem than ever. Remember, one tower is enough in most cases–we usually see 3-10 towers at cruise altitude.

To help you compare features side-by-side, we’ve compiled this chart to show most of the popular options. Click on the image for a larger image.

There is another option for pilots who enjoy a little bit of electronics work. Stratux is an open-source software project that turns commercially available parts into full-featured ADS-B receivers. For about $150 in parts and a few hours of assembly, you can have a dual band receiver, and there are plenty of options to add GPS and AHRS. There are even some pre-built kits available, although not all include a battery so read the parts list carefully.

Don’t make this decision harder than it needs to be. In its most basic form, we suggest a two step process. First choose your app, then choose whether you want “VFR features” or “IFR features.” The big difference between VFR and IFR would include a built-in AHRS. In most cases, you will have a decision after answering those questions.

For more information, visit the links below.

The post Which ADS-B receiver should I buy? appeared first on iPad Pilot News.