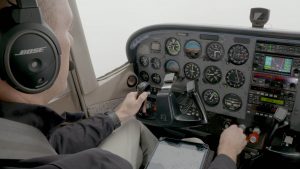 The iPad is a must-have for today’s modern instrument pilot, serving digital approach charts, in-flight weather and even backup flight instruments. Here are some important points to consider though before climbing through the clouds with an electronic flight bag.

More than 1,500 youth and their parents are expected at Oregon’s Grants Pass Airport March 15 for two presentations that will showcase aviation careers, camps, and learning opportunities for students interested in science, technology, engineering, and math (STEM) subjects.

House Transportation and Infrastructure Committee Chairman Bill Shuster (R-Pa.), the leading proponent of legislation calling for the removal of air traffic control from the FAA, announced he would no longer pursue the controversial proposal.

According to a report in Axios, President Donald Trump is pushing for his personal pilot, John Dunkin, to be the next FAA administrator.

FlightSafety International announced at Heli-Expo 2018 that a simulator for the Sikorsky S-76B has entered service at its Lafayette, Louisiana, Learning Center. The company also said it is offering a new series of Sikorsky S-70A courses at its West Palm Beach, Florida, center that are designed to provide a path for FAA type certification and recurrent training in the S-70A Black Hawk.

You have one week left to register for the <a href="http://faa2018.auvsi.net/home" <InvalidTag 2018 UAS (Unmanned Aircraft Systems) Symposium. Leaders in industry, technology and government will discuss the future of drones and their integration into the National Airspace System. The Symposium will take place at the Baltimore Convention Center, March 6-8, and preregistration will close in one week on Monday, March 5.

The Federal Aviation Administration (FAA) and the Association for Unmanned Vehicle Systems International (AUVSI) are co-sponsors of this year’s Symposium, which will bring together representatives from the FAA, government agencies, industry and academia to discuss the latest issues related to the burgeoning use of unmanned aircraft.

This year’s <a href="http://faa2018.auvsi.net/program/featured-speakers" <InvalidTag keynote speakers and panelists include:

Don’t miss out on your chance to take part in 2018 UAS Symposium! <a href="http://faa2018.auvsi.net/registration/registration-information" <InvalidTag Register here.

The Helicopter Foundation International (HFI) has announced 18 scholarship recipients for 2018. The scholarships, offered to aviation students around the world, continue the foundation’s longstanding mission to educate the next generation of helicopter industry professionals. HFI is the charitable arm of Helicopter Association International (HAI), and is recognized as a 501(c)(3) organization by the IRS.

Honeywell announced its new Health and Usage Monitoring Systems technology, Recon, Feb. 26 at Heli-Expo 2018 in Las Vegas. Recon’s sensors facilitate predictive, condition-based maintenance, and the system uses satellite communications to share helicopter health data in real time with maintenance crews on the ground, allowing them to track the health of a rotorcraft regardless of its location. Combined with other solutions like the Sky Connect tracking systems and Aspire 200 satellite communications system, Honeywell’s objective is to help operators benefit from the “connected helicopter.” 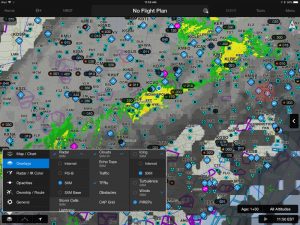 Some app updates bring stunning new features, like synthetic vision or major new hardware integrations. Others focus on the less exciting but equally important job of improving the existing tools, with new user interfaces or design tweaks. The latest version of Garmin Pilot (9.1.4) is in the latter camp, but the updates are well thought out and helpful. Here’s a look at what’s new.

Perhaps the major focus for Garmin over the last 18 months has been their Connext program, which allows the app to connect to a wide variety of avionics. This includes panel-mount equipment like the FlightStream and GTX 345 and portable receivers like the new GDL 52, which means Garmin Pilot can display in-flight weather, attitude information, SiriusXM audio, and much more.

Given this rapid expansion of options, it’s not surprising that the app itself had gotten a little difficult to use in places. Garmin took aim at this issue in this update, with a number of small changes that save time or make it easier to track the status of your connected devices.

First up is a new way to manage map layers. Garmin offers four different options for radar: Internet (which works on the ground), FIS-B (the ADS-B radar imagery), SXM (SiriusXM composite reflectivity), and SXM Base (the lowest tilt radar reflectivity). One scenario that can lead to unnecessary screen taps is when you switch from one source to another. For example, if you’re looking at internet radar on the ground before flight, then you get in the airplane (where you have a SiriusXM receiver), you’ll see the dreaded “No radar” warning. You have to manually switch from internet to SXM – a small thing, but a nuisance. Now the app automatically detects the weather source and turns on the appropriate layer, so you never have to make the switch manually. It’s one of those “it just works” features we like.

Along the same lines, Garmin Pilot now considers your aircraft flight plan when displaying weather layers that have different altitude options. In the example below, the app will default to showing in-flight icing for 3000 feet – the altitude specified in the preflight plan.

Radar is probably the most important weather product for pilots, but it does have its limitations, especially when it comes to coverage areas. Radar sites simply can’t reach the entire world, so Garmin Pilot now clearly displays gaps in radar coverage. This makes it much easier to determine whether there is no precipitation or no ground-based radar in the area. This is on by default for radar layers.

Here’s the coverage area for Canadian radar (delivered via SiriusXM), for comparison:

This version also includes a new, integrated Connext dashboard, accessed from the Connext menu option. This consolidates all the key information so you can see – at a glance – important status information about ADS-B reception, SiriusXM signal strength, GPS position, firmware, battery life and more. It’s the go-to page for troubleshooting, too.

Garmin Pilot has offered a digital logbook and data logging for some time, but the latest version of the app really makes this feature more useful. Now the app, when connected to a data logger like the GDL 52, will automatically record key flight information.

After the data logger records the information and transfers it to the app, Garmin Pilot can upload this information to the Fly.Garmin.com website after landing. From here, you can access your electronic logbook and even play back flights. There’s a sectional chart, simulated attitude indicator (if your data logger records this information), speed/altitude graphs and more. It’s quite easy to use once it’s enabled, and it’s pretty handy for reviewing training or proficiency flights.

One feature we really like in Garmin Pilot is the quick access buttons in the top menu bar. These allow you access to key features from any screen on the app: Home, Direct-to, Nearest, and Emergency. So even if you’re buried on a settings page, you can tap Nearest if the engine starts running rough. In the latest version, the Direct-to pop-up has been enhanced, with options for navigating to a waypoint you searched for, a waypoint on your current flight plan, recent waypoints, nearest waypoints or user waypoints you have created. It’s fast and simple.

Version 9.1.4 has plenty of other additions, including more Cessna, Mooney, and Piper aircraft models in the Library. The update is a free update in the iTunes App Store. An annual subscription to Garmin Pilot starts at $74.99.

Avidyne Corp. announced on Feb. 22 that its IFD series of navigation and communication units created as slide-in upgrades to legacy navigators have been cleared for installation in Robinson helicopters.