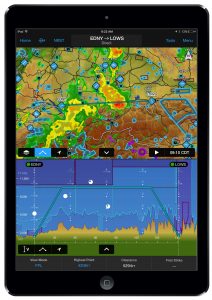 The development team at Garmin has been quite busy in 2016 and recently released their 2nd major update of the year to the Garmin Pilot app. The latest update adds additional European coverage options, along with a collection of innovative new features that we haven’t seen in other apps yet.

Here’s a look at what’s new in version 8.2.1, which is available for download now for iPhone and iPad in the app store.

Garmin Pilot is one of the few apps to offer both U.S. chart and database coverage right alongside a library of over 50 VFR and IFR charts throughout Europe.

The latest update adds VFR charts for France, which follows up to the recent addition of United Kingdom VFR charts a few months back. You can also now use the app to file a VFR flight plan when flying outside of the U.S. direct with the country’s Aeronautical Information Service (AIS).

Earlier this year Garmin added a new flight profile view to the app, allowing you to view a vertical cross section of airspace, terrain, obstacles and weather, to give you a more detailed look at your intended route at various altitudes.

The latest update adds some new display options in the flight profile, including the capability to overlay Temporary Flight Restrictions (TFRs) within the U.S., aviation routine weather reports (METARs) and bodies of water.

When paired with the GTX 345 ADS-B transponder, Flight Stream 210 or the GDL 39 3D, ADS-B In traffic can be viewed within profile view while in-flight. Back-up attitude information received by these products can also be viewed within the synthetic vision (SVX) page and the split-screen panel page of Garmin Pilot.

The flight profile view is also now available for display in the iPhone version of the app.

Another addition to the app allows you to establish personal minimums in your pilot profile, to provide alerts if the forecast weather exceeds your capability or preferences. Cloud ceiling and visibility minimums, as well as maximum crosswind components can be tailored to each pilot profile and differentiated between day or night.

When viewing runway data throughout the app, you’ll now see helpful wind information displayed right alongside the runway data. The wind direction is color-coded red and green to identify the most favorable runway, and broken down into headwind and crosswind components.

Garmin released the new aera 660 handheld GPS navigator earlier this year, bringing the latest in handheld and wireless technology to a dedicated aviation GPS display. Like all the gadgets Garmin releases these days, the 660 features Bluetooth connectivity, which allows you to connect it right to your iPad and the Garmin Pilot app. This allows the sharing of flight plan information between the two systems and keep them both in sync.

Garmin Pilot is available as a free download in the app store and includes a 30-day free trial.