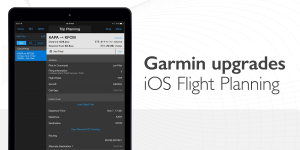 Garmin recently released its last update of 2015, adding some minor updates to flight planning in the iOS app and a more major change to the Android app. Here’s what to look for.

First, Garmin has moved its default flight planning service to Lockheed Martin Flight Service instead of DUATS. Many other apps have gone in this direction over the past year, as LMFS offers a modern platform that makes flight plan filing much faster and more reliable. Garmin Pilot users will get an email confirmation when a flight plan is filed, and it’s immediately accessible by Air Traffic Control – not always the case with DUATS filing.

This change also enables filing in the ICAO format, a more complicated flight plan form, but one that is increasingly becoming the standard. There are no settings to change for LMFS filing and it requires no new credentials, so it’s a fairly invisible change for pilots.

Another upgrade in the area of flight planning is the app’s new Trip Planning page. Pilots can now input a new flight plan, then quickly create a NavLog and get a formal Briefing from Flight Service by tapping the options at the bottom of the page.

Garmin Pilot has long offered what we consider to be the best all around aviation app for Android, with a good mix of powerful features, an easy-to-use interface and solid support. Lately, the app seems to be a little stagnant – it did not see the same number of updates as the iOS app, and it still lacks synthetic vision.

But the most recent update is a good sign, as Garmin has delivered a pretty significant upgrade to the user interface. A new slide-over menu is fast and easy to use, with frequently used tools like the stopwatch, screen lock and brightness settings quickly accessible. This is a small change but a big time-saver in flight. The split screen layout has also been upgraded, with a nice tab-style interface for selecting the bottom half of the screen (widgets, charts, traffic or terrain, for example).

Version 5.0 for Android also includes some other usability upgrades: