China will soon publish regulations for civilian unmanned aircraft that will help put an end to irregular flights, according to an industry insider. Ke Yubao, executive secretary-general of the Aircraft Owners and Pilots Association of China, said on …
Source: bingNew rules to rein in illegal flights “This image was taken from the backseat of a 1975 Cessna 172, part of a VFR cross country journey from California (KRHV) to the East Coast and back. Video blog series was produced documenting the entire journey for GA audiences around the world to enjoy. The journey started on March 30, check out the video here:

Source: http://generalaviationnews.comPicture (and video) of the day: Cruising over NYC

Mike Patey is a pilot and airplane builder. Since getting into flying 15 years ago, he has earned multiple ratings and accumulated over 7,000 hours and flies about 400 hours per year.

More impressive is the fact he’s built a Van’s RV-6 and RV-10, a Zenith 801, a Compair 8 Turboprop, an Epic LT, and six Lancair Legacies including Turbulence, a turboprop-powered model.

My first question. How? How have you build that many airplanes in so little time, comparatively speaking? Turns out, Patey sets goals and works to achieve those goals.

“One basic rule that commands a fast and guaranteed path to finish – once I start any project, businesses, aircraft, whatever – is something must get done and executed on the project every day, no exceptions — ever!”

Large or small, at least one project task must be completed each day “before I can lay my head on the pillow,” he said.

His wife often tells him he has an obsession with unfinished projects.

“Even if all I do is go online to choose and order a part I need,” that’s five minutes of progress, he said.

“You meet the goal and what happens next is why it works,” he explains.

“Some want the red easy button,” finished Patey. “I want the goals that create the green go button.” 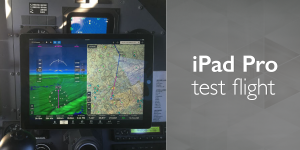 The iPad Pro began shipping in mid-November, promising to bring a new level of productivity to tablet users with its large 12.9″ display and fast performance. It’s an impressive tool for everyday work, from spreadsheets to graphics work, but can it work for pilots? We took it flying to see.

The iPad Pro feels a lot like a scaled up iPad Air 2.

The most obvious feature of the iPad Pro is, obviously, its size. We were expecting a big tablet, but we were still surprised by its size when we first removed it from the box – at 12″ tall and almost 9″ wide, this is definitely a two-hand device. On the plus side, though, it is amazingly light (about 1.5 lbs.) and very thin (about 1/4″). If you’re familiar with the latest iPad Air 2, the iPad Pro is basically the same exact tablet, just scaled up. In that respect, the learning curve is essentially zero.

The screen is indeed impressive, at 2048 x 2732 pixels and a 264 ppi pixel density, making everyday tasks like web browsing and email replies easy. Even with this bright, high resolution screen, the iPad Pro’s battery life remains excellent: we easily got 8 hours of use from a single charge for non-aviation use, and over 6 hours of flying time (with a WiFi device connected).

Unlike the iPad Air 2, the iPad Pro is only offered in two memory options: 32GB and 128GB. For aviation use, 32GB would be plenty, so this is a good option at $799. However, if you think you might use it for more than aviation, the 128GB model is probably the best buy ($949). This would leave plenty of room for videos, photos and other apps. Given its larger size, it’s reasonable to assume you might use the iPad Pro a little harder for everyday work. Note that if you want the LTE model (cellular connection), that is only available in the 128GB configuration, for $1079.

Before getting into the cockpit, we used the iPad Pro for a number of pre-flight tasks, since many pilots use their tablets for this as often (if not more often) than they do for in-flight features. Here, the large screen really shines. Checking the radar map in Garmin Pilot or reviewing a complicated instrument arrival procedure in ForeFlight is faster and easier with the big screen. We spent a lot less time panning around maps, and got a better big picture sense for weather.

One nice feature here is the split screen option, which allows you to show two apps side-by-side. There are actually two different versions of this feature in iOS 9: in slide-over mode, a second app can be displayed in the right quarter of the screen but the original app on the left is paused; in true split-screen mode, two apps can be used at the same time with all features. Every aviation app we tried can be used in slide-over mode, which is handy for quickly checking other resources. However, to use the more powerful split-screen mode, the app developer must specifically write the app that way. No aviation apps that we’ve tried support this yet. Stay tuned.

We then took the iPad Pro flying, in a Cessna 172 and a Pilatus PC-12. Here, the main challenge quickly presented itself: mounting or securing the large tablet isn’t easy. Some companies are just beginning to announce mounts for the iPad Pro, but this seems impractical in all but the largest airplanes. A yoke mount, for example, would be unworkable in either of the two airplanes we tried. A suction cup mount could work, but it would take some serious effort to find a spot that didn’t block too much of the panel or the outside world.

Having said that, the iPad Pro did work quite well on our lap. A good kneeboard (like this one) would make it usable in a number of airplanes. Simply placing it on the floor or between the seats when not in use is another viable option. Like all iPads, a case or a rubber back of some kind is a good idea because the tablet itself is slippery.

In the air, we found the large screen to be quite helpful. Approach plates, in particular, look great and require no zooming:

The iPad Pro is also ideally suited for split screen views, like synthetic vision and moving map side-by-side. Most of the major apps offer something like this, including ForeFlight, Garmin Pilot and WingX. The picture below shows how close this setup is to a full glass panel:

Garmin Pilot offers a number of split-screen options, which we found to be an excellent use of the iPad Pro’s screen real estate:

The good news is that basically every app that works on other iPads will work on the iPad Pro too. However, apps must be tweaked slightly to take full advantage of the larger screen; without this, the app looks slightly “zoomed” and not as crisp. ForeFlight has been updated to run in an optimized way on the iPad Pro, and looks great. We tested Garmin Pilot and Fltplan Go in addition to ForeFlight, and while both work just fine, they have not yet been optimized. We would expect that change in the next few weeks.

So does the iPad Pro work for aviation? Yes, it most certainly does and we expect some pilots to fall in love with its large screen for charts. However, it’s hardly a slam dunk. In many airplanes, especially ones with a traditional yoke, there may not be room for a tablet this large. If you like yoke mounting, the iPad Pro is also not a good option. We can offer an endorsement, but with some important caveats.

Our advice is the same its been for a while now – buy the iPad screen size that fits your flying. The iPad Mini 4, iPad Air 2 and iPad Pro (the latest generation on offer) all offer the same basic features and performance. The difference is mostly screen size. If you’re flying a Gulfstream, an iPad Pro would be a terrific addition. In a Cub? The Mini is probably the right choice.

The idea is a little hard to grasp, as Airbus uses a lot of general and broad language in its patent. It seems, however, the company has two ideas for how these modules could work. The first is to enable an aircraft to serve multiple purposes; freight …
Source: bingAirbus modular airplane cabins detailed in new patent

We are still looking for readers’ best photos of 2015 for our Dec. 20 print issue. Email your photo (be sure to include specifics like where it was taken, the plane description, and the full name of anyone in the photo) to Editor Janice Wood.

Note: Please send the largest file size you have available. Bigger is better.

Source: http://generalaviationnews.comLast call for The Year in Pictures

George Gould, who is based at Scholes Field (KGLS) in Galveston, Texas, sent in this photo of himself and his plane, complete with a personal message. “Good advice,” George notes. Source: http://generalaviationnews.comPicture of the day: Salvation

KUWAIT: Kuwait Airways Corporation (KAC) has received the 12th and last aircraft of the leasing contract with Airbus … under the auspices and in the presence of kuwait’s Consulate General in Dubai and Northern States, Diab Al-Rishidi and a number …
Source: bingKAC receives ‘Al-Jahra’ aircraft from Airbus

The ministry has decided to delegate the power to grant “initial NOC (No Objection Certificate)/In-principle approval for import or acquisition of aircraft to the Directorate General of Civil Aviation (DGCA),” an official release said on Saturday.
Source: bingCivil Aviation Ministry eases norms to import aircraft